I didn’t have many friends as a little kid, and those friends I did have were strictly at school. Books were more often my company, and I spent much of the rest of my time weaving stories with my toys as the protagonists.

I had a set of four cat Beanie Babies—heroes of their home world, each one with powers matching a season. I took Voltron’s sword, which to me had a shape that was a perfect blend of electric and snow, and gave it to the leader, Scratch, who had the powers of Winter. I also took the vest of a stuffed Jar Jar Binks stuffie and put it on him.

Their stories got wild.

My backyard was pretty big. I liked to wander around the yard and imagine that the property was a ship at sea—a vessel fashioned like a clockwork island with house and yard atop and grand machinations below keeping it all moving. Sometimes it would submerge and a forcefield bubble would hold back the sea and it’d be attacked by sea monsters and pirates in submersibles and these four (and all my other toys) would man it, holding fast in the name of adventure.

As I grew up, my stories became tame. The wild aspects were leftovers of childhood madness against an increasingly mundane backdrop infected with droll realism. It was only in the last couple years—mostly since joining World Anvil—that I realized how damaging this was to my storytelling.

These days I write Speculative Fiction. A surprise, I’m sure. It’s is a genre too often taken for granted, an umbrella term that suffers from a case of being so open-ended that it’s easy to overlook the breadth of it… or perhaps that’s just me. Maybe you already know better. If that’s the case, humor me for a moment.

Speculative fiction is the branch of fiction which encompasses all the genres and stories set in the realm of the impossible by way of magic, unexplained technologies, and general absurdity. In the words of Robert Heinlein, who coined the term:

“[…] the story embodying the notion “just suppose—” or “What would happen if—.” In the speculative science fiction story, accepted science and established fiefs are extrapolated to produce a new situation […]. As a result Of this new situation, new human problems are created—and our story is about how human beings cope with those new problems.”

Simply put, it’s the art of saying “what if” with a weird idea and running so far with it that you end up with a story. Sounds easy, but it can take a surprising amount of work to get into the mindset of Speculation, and for us to not pull our punches when it comes to writing it.

How do we do that?

As it turns out, we were born with the ability. We’ve just forgotten it along the way.

Stranger in a Familiar Land

Like all children, I know squat about the world. Everything I learned ended up in Ethnis. It became the vault of all my knowledge, and changed entirely to not only accommodate all this knowledge. I read horror, and so it gained horror, and I treated it as such. Same with sci-fi, fantasy, and everything else I loved to read. I felt obligated to fit a mold, and didn’t even realize that I felt that way.

Don’t get me wrong, realism is a great tool. It keeps your world relatable and understandable when you tether the laws of our world to your own. It provides a lens of sensibility to understand it by, and makes our reader a Stranger In A Strange Land. (Hey look, more Heinlein)

But there’s a fine line between tethering and binding. Depending on the story you’re trying to tell, realism can hold you back. It held me back, and it wasn’t until I asked myself what I wanted to say with my world that I realized that 1:1 realism with the laws of reality wasn’t integral to my message.

A message doesn’t need to be simple, but it has to be something. Whether it’s a question or a statement, every story is a vessel for a message of some sort, and while your world may have multiple stories, those stories reinforce a core theme. Your message. Your theme.

So long as you’re unable to ask yourself what that theme is, your world will stay just out of your reach. It’ll always feel a little wrong, uncanny, like a robot facsimile of a human which doesn’t quite smile right.

Now, don’t despair. Asking yourself what the message of your world is can be an existential crisis unto itself. Trust me, I know. But that’s an important part of the process. If, like Ethnis for me, your world evolved from your experiences rather than beginning with an intent in mind, the odds are good that your world is a reflection of your deeper issues and concerns, and in asking yourself what truly concerns you in this world, or what it is you turn to escapism to avoid, you may find your theme.

What do you love? What do you hate? What do you fear? Take notes. Take your time, because this will take time, and it is worth that time because it makes your theme stronger. Don’t rush yourself. Don’t stop yourself from writing just cause you haven’t answered it. Just don’t stop asking yourself.

“Why am I writing this? Why does it interest me?

It’s also entirely possible (and valid) that your world rose from a crazy idea that you just fell in love with.

Feel free to steal these ideas by the way. I’ll never write them, but I will buy your book if you do.

And in case you were wondering, I think the question of Ethnis is “What is worth dying for? What it worth living for.” I think. I’ll continue to grow, and so will Ethnis, and that’s okay. A world shouldn’t be static. We’re all just archaeologists, uncovering the world and figuring out how the pieces fit together.

Let’s say you have your theme, or something close to it, or at least an idea of what the theme isn’t.

How important is realism to that message? How important is it to abide by the rules of your genre? This is a very important question. The rules you decide on are the holy testament of your world, and should absolutely be abided by. The Road Runner cartoons did this. Providing the right limitations for yourself ensures that everything in your world reinforces the stories you tell with that world.

These laws might feel natural to the point of seeming redundant to you. That’s also okay. It’s also okay if your rules are difficult to follow, if the point is to challenge yourself to write within those constraints.

There’s also nothing wrong with making the laws of our world the laws of yours, but do so willfully.

When you know the rules you want to follow, you are left with a sandbox. Ask yourself, relentlessly, what’s possible within those rules. Explore them, import other ideas and adapt them to fit those rules, challenge your rules, text their flexibility.

Never stop asking yourself what if.

That is the first and only step to writing Speculative Fiction. Everything else is just… writing.

These four still feature prominently within the lore of Ethnis. Left to right: Scratch ended up split into four characters: Debuk’wah, Sketarchi, Tigari, and Thousandstrike. Alephus (nee Ultus) is a Deity of summer, forges, and heroes. Leolana (nee Lily) is a Deity of Spring, Strongholds, Hearths, and Children. Metkrahh (Punalace ) is a Deity of Fall, War, Reason, and Sacrifice. 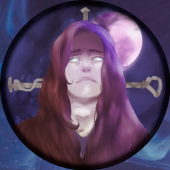 Sage for Writers and Authors