Before we begin, we want to extend a warm congratulations to the happy couple – David and TJ (Naelin and TJ on World Anvil)! World Anvil was created as a platform for our users to create worlds. We never expected to have the honor of those users making lives together too!

The couple got married at the end of July, so we wanted to sit down with them and chat about their wedding, how they met, and how their passion for writing and worldbuilding brought them together!

What Initially Drew you Guys to World Anvil & What Were Your Goals?

“About 15 years ago I started building my world by trying to put my characters and creatures in the same place. As time passed I struggled documenting the intricacies and soon enough a Google Docs stopped being enough. I googled and tried a lot of tools until I found WorldAnvil in 2019, I fell in love instantly, WA was exactly what I was looking for.

One of my actual goals in life was for someone to learn about my world before I died. Not only have I achieved it, but nowadays I have people actively asking questions, seeking information and inspiring me to create new content. It’s more than I would have ever imagined.”

“I found World Anvil through the /r/worldbuilding subreddit from one of Dimitris’ early posts about the website back in 2017, prior to that I’d only been worldbuilding for a few months or so after getting hooked on Artifexian’s YouTube videos!

My goals back then were to have lots of fun going full-nerd into the different areas of worldbuilding (like cartography, conlanging, and of course, writing). I don’t think it’s a goal that can ever be “completed”, and I’m really happy to have found such a broad hobby that caters to my creative needs.”

How did you both meet through World Anvil? Which part of the community were you engaging in?

“I found TJ at the start of WorldEmber 2020 due to his Voice of The People video, and the subsequent torrent of thirst over his “WE is coming” vampire gif. I found it amusing and shared the story with some friends, who later told me it was ‘obvious from kilometres away that you fancied him’. Oops.

After some time my friend EvanArix shared with me the “Forbidden Tomes” article that TJ did for WE. We both found it fantastic and found that his sense of humour was well in line with ours, and the three of us shared being trans guys. We reached out to him and Ademal about making a small group of trans folk from WA, and the rest is history. History that contains A LOT of Evan working as a matchmaker since TJ and I are shy dunces that didn’t dare talk to each other. It’s all his fault.”

“I might have raised a few eyebrows in proclaiming the dawn of WorldEmber 2020 with a vampire gif (from the Spookiful People Halloween dress-up in Discord). That year I decided to really write about what I wanted to write about, and stop writing things I thought my world should have. My Forbidden Tomes article in particular caught Naelin’s attention and from there I was ambushed in my Discord DMs by a very giggly and shy EvanArix and Naelin, who had lovingly nudged Nae into talking with me.

We got super into WorldEmber together and found even more interests, and on Christmas day we made it official (technically it was the 24th for me because of time zones, so we celebrate both days)

I love taking part in all of the challenges and competitions together with my amazing nerd husband! We have found our family through World Anvil’s community, too.”

Did your mutual love for worldbuilding / writing inspire anything in your wedding?

We spent a lot of time finding ways for WorldAnvil and our worlds to be represented at the wedding.

Some early ideas included making a cake in the shape of an anvil (which is also featured in TJ’s world Melior as an actual tradition) to the idea of doing the wedding in Gretna Green, a place where you actually get married over one.

We settled on getting an anvil for the wedding ceremony, and bought a beautiful jewelry anvil that we laid at the desk during the ceremony where we explained the significance of it.

We timed everything to be able to do our party on a date that we share in our worlds as a day of celebration of love and dedication, it was hard but we managed it!

Our invitation contained both of our world’s maps in the background as well, and our witnesses were EvanArix and Julian, both people we met through WorldAnvil.”

“Yes! Our wedding invitation featured both of our world maps, and at the ceremony we brought with us a (very shiny) little anvil to put our rings on. We had a lovely judge who asked us all about how we met, and EvanArix and Julian were there too to add their wholesome and mischievous details to our story.”

Keep up with Naelin and TJ!

Naelin and TJ have published some amazing work on World Anvil, and if their story has touched you, why not check out their worlds too? Lose yourself to the other stories they’ve told!

In a world where two dominant species keep a tense and violent relationship, a cataclysm left the Tetsus weakened, and the Societarians struggling to reinstate their nations and states, and show that they are still able to defend themselves.

Symbols of Power explores topics of rebuilding, daily life and learning. It is small scale and personal, focused on people and small communities.

Fifty years ago, the world of Melior was forcefully introduced to magic during an apocalyptic invasion.

Folks are questioning their old traditions and faiths as they struggle to rebuild amidst the new dangers of everyday life.

We want to extend another huge congratulations to the wonderful couple. You’ve likely seen the images they were kind enough to share with us throughout the article. We feel so blessed as a team to witness love flourish on our platform, and wish nothing more than an infinite amount of happy returns to the two of them!

We asked for some final comments from the two, and they had some comments they wanted to share about World Anvil with YOU, the beautiful reader of this article.

“We are forever grateful for WorldAnvil’s community and our Anvilite friends and family and all they did for us and our lives.

We hold WorldEmber close to our hearts, and I will share the lesson that Evan and TJ drilled into my head two years ago, since it served me well: When you doubt your own writing, “Just write the damn thing!”

“I just want to say a massive thank you to the wholesome friends and family we’ve made in the World Anvil community! Keep writing! Keep being awesome! And share your stuff, you never know what might come out of it!”

“Serukis and their wife gifted us two plushies that I brought with me to Argentina from the UK. The white fabric is actually from their original wedding dresses as a sign of good luck, and Serukis’ wife lovingly made these by hand!!” 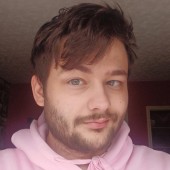 Adam is a British Marketing Specialist that joined the World Anvil Team in January of 2022. He plays TTRPGs, namely Pathfinder, enjoys Warhammer (both Fantasy/AoS and 40K) and is a huge fan of Pokémon. He also writes blogs, sometimes.

A New Chapter on your World Building Journey