Seeking alternatives to Tumblr? Tumblr has suffered a major hit this week. With the announcement of their new “family friendly values” policy, motivated by advertising concerns and their removal from the Apple AppStore. On Dec 17th, Tumblr will ban adult content – such as “female presenting nipples” – from its platform. The move has upset many creators, from fanartists to entirely SFW blogs. Many SFW blogs that have been hit by the website’s new auto-censor algorithm and appeals denied. An exodus from the website is presently ongoing, with tags such as #riptumblr and #tumblrisdead trending. We’ve put together a list of some of the best alternatives to tumblr available for those considering the move.

Many artists are considering a return to DeviantArt, in the wake of the Tumblr rule changes. Though DeviantArt is well known for its NSFW content, it is technically prohibited by their ToS. It is also known for performing occasional purges of adult content. DeviantArt however provides one of the better fandom-orientated gallery systems on the internet at present. deviantart.com

World Anvil is platform for authors and RPGers, as well as worldbuilders of any other type. It presents a number of features useful for those wanting to move their writeblr, worldbuilding blog, or RPG homebrew. World Anvil also provides community features and challenges, as well as contests. Launched just over a year ago, the platform has been growing quickly since. Upcoming features will also further expand community features in the coming year. Extending its ability to be used as both a writing platform and a social platform for creatives. World Anvil is independently owned, and not funded by advertising revenue. WorldAnvil.com

Mastodon is a de-centralised social media network unlike any other around at the moment. It is not a single website, but many – called instances – run by independent communities, with their own rules. They have interaction between each other, but are in many ways are entirely different social media websites. Sharing the software but not the userbase. As a result rules on content vary between instance. joinmastodon.org

Pillowfort is a very new entrant to the world of social media. After a successful kickstarter earlier in the year, they launched a beta that is presently live. When the Tumblr Exodus began, they were down for a security update. But Pillowfort has relaunched and positioned themselves as one of the strongest alternatives to Tumblr. Successfully taking the tumblr format and adding in features such as more flexible privacy settings. Presently sign up is behind a $5 fee during Beta. pillowfort.io

Many artists are moving their content to Twitter. The micro-blogging platform has a large community, and has an existing userbase interested in art. However, its character limit is prohibitive to many blogs on Tumblr who may wish to transfer to Twitter. Writeblrs, worldbuilders, and many other blog formats will struggle with this restriction and might find it a poor alternative to Tumblr. However Twitter is well designed for visual content. twitter.com 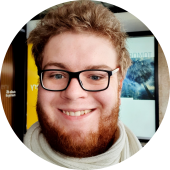 I'm an incurably Australian lover of tea, vintage, and anything adorable and nerdy. I occupy my time with worldbuilding, video gaming and reading. I'm the World Anvil Social Media Manager! Find me on Discord as XanthussMarduk#0963, follow me on twitter @XanthussMarduk or check out my personal blog SorcererOfTea.com.

Getting your readers to your Discord server with the new [discord] tag!